I was in the middle of a reading slump for most of December, so I really didn’t get as many books finished as I wanted. But I did go out with some pretty strong titles!

Also, some of you know that I had surgery last December–I finally wrote up everything that happened and shared it. If you’d like to learn more, that document is here. 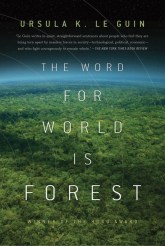 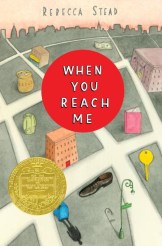 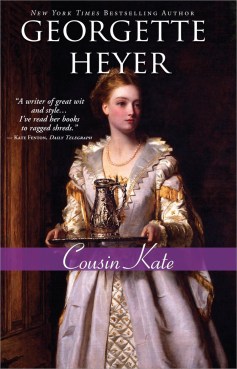 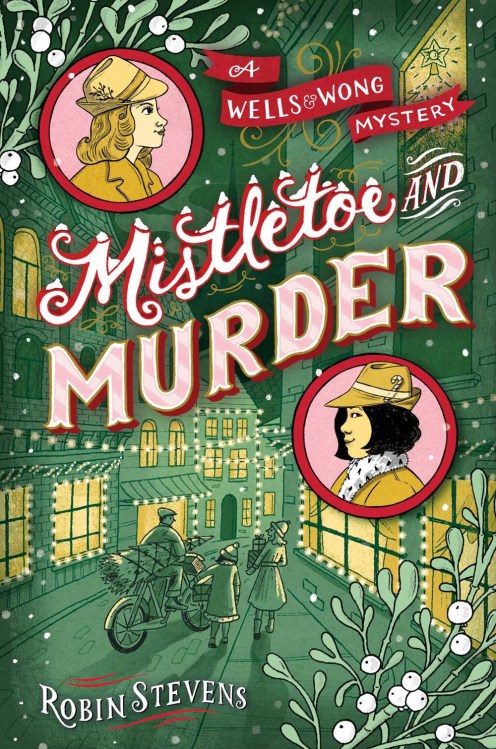 Total rereads: 3 (When You Reach Me; Cousin Kate; Arabella) 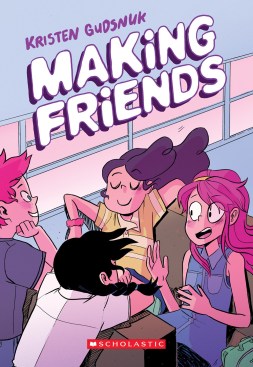 This was on the NPR Book Concierge and it sounded like the kind of mystery I’d like. It was! I’m always a sucker for the “assuming someone’s identity” trope, and Ware plays nicely with that here. I also liked Harriet a lot. It feels very old-fashioned on several levels, I think intentionally, and I’m still trying to figure out how I feel about that aspect.

Darius the Great is Not Okay Adib Khorram 11.17  [review]

I kind of stopped doing the weekly roundups towards the end of this month, but I could be persuaded to try them again if anyone is interested!

The Proposal by Jasmine Guillory

When Nik’s boyfriend very unexpectedly proposes to her on the Jumbo-Tron at a Dodgers game, a stranger and his sister rescue her from a camera crew. Carlos just wants to do the right thing, but when after they keep meeting, it turns into something more. The Proposal by Jasmine Guillory is a contemporary romance featuring an African-American heroine and a Latino hero. It’s a sequel to The Wedding Date, which came out earlier this year.

I really adored The Wedding Date when I read it, so of course I picked up The Proposal as soon as I could. And it was the perfect light but smart read for the mood I was in.

Public proposals are a Thing, of course, and I’ve always kind of hated them. It turns out I’m not alone! Here’s a whole book whose inciting incident is a very, very botched public proposal. That in and of itself says a lot about the kind of book this is–very aware of the real world while also having that slightly-Technicolor version of reality that is often a feature of romance books.

I appreciated that Guillory didn’t just have Nik get over the proposal instantly. She deals with a very understandable range of emotions, and the anger that her ex-boyfriend throws in her direction for daring to reject him is entirely plausible. The fact that she doesn’t just instantly go back to okay did make it a little tough for me to root for her rebound fling with Carlos at first, but as the story went on, I started to buy their relationship and the way they’re both wary of it becoming something real.

I also loved the food in the book–it was so fun to read about characters who love cooking and eating. It’s a nice touch of grounding and creativity. Also, as with The Wedding Date, there’s a really nice sense of place here which is nice to see.

Carlos’s desire to take care of his family was the only aspect of the story that didn’t quite work for me. I understood the whys of it, and it theoretically made sense, but I didn’t fully buy that he had never had the conversations with his mother and sister that he needed to, and it seemed at odds with his truly supportive attitude towards Nik. So that made it hard to be as invested in his part of the storyline. That said, I truly enjoyed the rest of the book and his relationship with Nik was really fun to read.

Overall, I’d suggest this one for fans of smart contemporary romances, and I hope that we’ll have more books from Guillory soon!

This was a pretty good month for books! I didn’t love everything equally, but I did have a couple of really strong reads and that’s always nice. I’m hoping to finish up the Steerswoman series in September and keep reading the Astreiant books. Just as a reminder, I always post each book I finish on Instagram, so if you’d like to stay up to date on what I’m most currently reading, head over there. 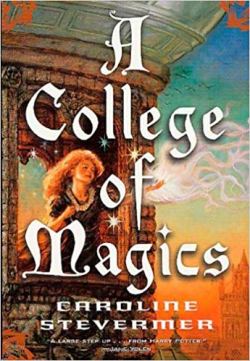 The Bookshop on the Corner Jenny Colgan 8.27

Cafe by the Sea Jenny Colgan 8.9

I’ve been on kind of a roll with adult fiction recently, after my earlier YA romcom binge. Here are a few that have no thematic connection except that I read them recently. 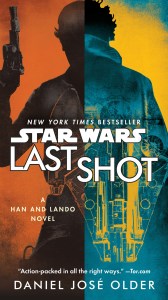 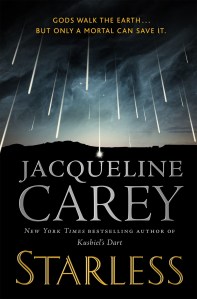 Last Shot by DJ Older: Star Wars tie-in, about Han and Lando and one last job. There’s some interesting past/present narration and we see things from both Han and Lando’s points-of-view which is cool. I do wish that the timeline was slightly clarified–the main action takes place a few years after Ben Solo is born (I think he’s two here) but the older parts are all “fifteen years earlier” or “ten years earlier” and sometimes it was hard to orient to where that was in the larger SW universe. However, I always like a good heist and there are some funny characters and moments, plus some heartbreak as Han wonders if he’ll ever learn to be a good parent. Bonus for Lando’s amazing wardrobe.

The Kiss Quotient by Helen Hoang: Super cute contemporary romance! I liked a lot of things about this one, especially the interactions between the main characters and the male mc’s family. It was really sweet to see a male mc who cares so much about his mother and sisters, and it helped make sense of how he understands Stella. There’s not much external drama here, which is also nice sometimes! It’s much more focused on Stella and Michael and whether they will/can commit to each other.

Starless by Jacqueline Carey: This is actually the first book by Carey that I’ve ever read, although I know she has a lot of others out there. I have extremely mixed feelings about this one. On the positive side, the narration was pretty engaging and some of the worldbuilding concepts were pretty neat. On the other hand, I felt pretty strongly that this book needed to be edited down, or that one clear through-line should have been established, or both. There are entire sections that felt irrelevant to the ultimate story, and I never felt truly invested in Khai’s journey, resulting in what felt like a somewhat boring read. But I might be in the minority on this one, so take my grumps with a grain of salt. 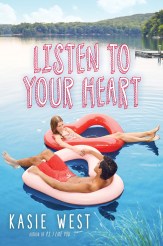 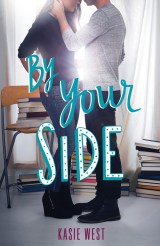 Listen to Your Heart Kasie West 7.10

The Girl with the Red Balloon Katherine Locke 7.9

Unicorn Rescue Society: The Creature of the Pines Adam Gidwitz 7.6

The Beauty That Remains Ashley Woodfolk 7.2

To me, summer feels like the perfect time to read a bunch of YA romcoms, so I have. And it’s helped me zero in a bit on what I find most enjoyable in this type of book: a story that’s sweet and funny but also has a bit of substance to it. And, of course, great characters. Comedy and romance are both inextricably character-driven, so that makes sense! Anyway, here are some I’ve read and enjoyed recently. 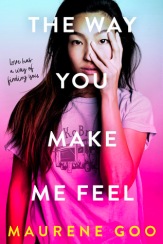 The Way You Make Me Feel by Maurene Goo

I really liked this one; the main character is prickly without being so mean that I was put off (I know this makes me sound like one of those people who hates ‘unlikable’ characters. I don’t! I’m also not convinced that a romcom is the best place for one? anyway.). Also, I really liked that the growing friendship felt as important, grounded, and central as the romance. Woo! The mom aspect wasn’t my favorite, but overall this was great. I need to read more Maurene Goo.

From Twinkle With Love by Sandhya Menon

Awwwww, I really super liked this one. It’s a cute story and I thought it worked just as well as When Dimple Met Rishi. The conceit of  Twinkle writing to her favorite female directors could have felt gimmicky, but it was just earnest enough to pull it off. I did realize where the story was going pretty quickly, but it was still effective for me.

Listen to Your Heart & By Your Side by Kasie West

So, I strongly prefer Listen to Your Heart, since By Your Side largely features the male main character not talking to the female main character while she tries to draw him out. It just made me uncomfortable; while I’m sure it was meant to be an update of the taciturn hero trope, this version didn’t work for me. (Also, I am a pedant and I know it, but: libraries have phones and doors that open from the inside even if locked!) But I really liked Listen to Your Heart, and the whole podcast scenario seemed pretty solidly depicted. And I did like the characters in that one a ton, especially the rivalry between Kate’s family and the local hotshots.

Always Never Yours by Austin Siegemund-Broka and Emily Wibberley

This one veers a bit more into drama territory (wow, this was not intentionally a pun but I’m just going with it) and is a lot less light-hearted than the other books here. But I’m including it anyway, because I think it still hits a lot of the same emotional beats as most romcoms. I liked it a lot! It’s thoughtful about a lot of stuff and I liked having a theatre story that focused on directing as well as acting. I’m also very curious about the fact that this is a husband and wife writing team but this is not a book with dual narrators! Intriguing.