I went on a little James Marshall kick recently–he wrote such charmingly weird little books. I think my favorites are George and Martha, which I also enjoyed when I was young. Marshall managed to get such a wide range of emotions out of quite simple illustrations. I also liked the two Fox books that I read too–in some ways I think those are a little closer to childhood than George and Martha. At least, they’re more from a child’s point of view.

I also discovered the Bill and Pete books by Tomie DePaola. Now, I grew up on Tomie DePaola, and LOVE him and his books. But somehow I had never read Bill and Pete until recently. Speaking of charmingly weird! I think you have to have a very particular sense of humor to enjoy these, but if you do, you really do. Bill and Pete Go Down the Nile is the middle book and, in my opinion, by far the best. But all three are remarkable for their matter of fact presentation of outlandish facts and the relationship between the text and the illustrations. (The picture of the little crocodiles going up the side of the pyramid gets me every time.) 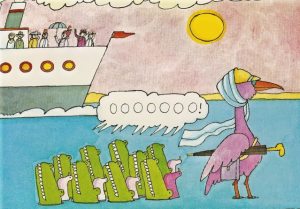 And of course there’s a NEW ELEPHANT AND PIGGIE! In A Big Guy Took My Ball, a big guy takes Piggie’s ball and Gerald has to try to right the wrong. It’s not the best in the series–the whole thing was a little on the predictable series and also nothing will ever beat I Broke My Trunk. But, you know, Elephant and Piggie.