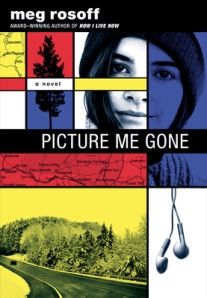 Mila is twelve years old, the only and beloved child of two intellectual and loving parents. She and her father, Gil, are about to go on a visit to America, to see Gil’s friend Matthew, when word comes that Matthew has disappeared. They go anyway, but instead of catching up, they are searching for clues to what happened. Mila, with her gift for seeing things that other people miss, is especially suited to this. But what happens will change Mila and her world.

Picture Me Gone is only the second book I’ve read by Meg Rosoff. I liked it from the beginning, probably because Mila is both older and younger than her years. She notices things–patterns, details–but she doesn’t always see what they mean. She doesn’t always understand adults or why they act in the ways they do, although she lives in a very adult world. Rosoff excels at voice, and Mila’s is pitch-perfect.

It might be wise to note that, although the plot of the novel is centered around Matthew’s disappearance and finding out what happened to him, Picture Me Gone is not a mystery, at least not in the traditional sense. And further, mystery fans could easily feel frustrated at the way the book doesn’t fit into that category. But for me this wasn’t a problem, because it’s so clearly a book about Mila, and her growing-up.

The book is full of secrets that people are keeping. The slightly opaque style suits this very well; we are not told directly where Owen is. Rosoff does the opposite of info-dumping. And in some places the connections between events and Mila’s thoughts are not necessarily clear. There are connections, but it is work to find them, and to parse out what happens. This is not an easy book, but it rewards careful attention with layers of richness.

And it’s fascinating to me, the way Rosoff takes the common YA theme of growing up and changing your relationship with family and heightens it, compresses it. Mila is so cocooned in London, swaddled in comfortable world of family and school. It’s perhaps a bit different than most kids’, but it’s familiar and safe. Going to America means literally leaving all of that behind, being forced into a different life. That journey, both physical and personal, gives the book a bittersweet feeling; Mila is not who she was when she left London. She can never be that girl again.

I liked all of this quite a bit, and I think that Rosoff, if not Mila, is quite aware of the privilege of her upbringing. At the same time, the story occasionally runs into the limits of its form. Because it is so firmly centered on Mila and her voice and her experience, the motivations of other characters can only be hinted at. This means that virtually everyone is somewhat of a cipher. Philosophically, this fits into the story quite well, but it makes for a slightly frustrating reading experience. Similarly, the fact that there are no dialogue marks creates occasional confusion–is someone speaking? is this Mila’s thought? Usually it’s possible to parse out which is which, but not always. I get that it’s a stylistic choice, but when style means lack of clarity, I have problems.

Overall, I think this is quite a rich little book, although I love it intellectually more than emotionally. This isn’t a bad thing, but it does mean that when I list favorite books, it’s less likely to make my list.

My review of How I Live Now

Other reviews of Picture Me Gone: Ana at Things Mean A Lot; Liz B