Anne Dowling is popular and happy in her private school in NYC. The only problem is the fact that she accidentally sort-of burnt part of it down. (Oops.) Her parents promptly send her to a boarding school in Boston, in an effort to keep her out of trouble. Unfortunately, Anne has hardly settled in before her roommate is murdered, and the school issues a statement which keeps the students from speaking to anyone.

So, this one is a perfectly nice boarding school mystery, of the light variety. Perfect for Gossip Girls/Ally Carter fans, who are looking for something that has the same readability and boarding school ethos. It’s not really trying to be something deeper, and that’s fine. I suspect there will be quite a few satisfied readers.

On the other hand, it’s exactly what is looks like–there’s nothing to particularly set it apart from any other book of its genre. That both is and isn’t a criticism. On the one hand, everything is fairly predictable. On the other, again, satisfied readers.

I did certainly appreciate the fact that Anne is not as annoying as she could have been. Sure, she’s a privileged white girl whose parents have enough clout to get her into a prestigious boarding school mid-semester. But she’s not a mean girl, although she does instantly form a rivalry with the queen bee at her new school. She actually comes across as very sincere, although certainly more than a bit naive and short-sighted about the rest of the world. I liked her much more than I expected to, which is nice.

So, a mixed bag here, but if you like boarding school stories and/or mysteries, this is a nice way to spend a few hours.

Charm & Strange is a book about hard things, but it’s a book that is full of heart and beautifully written. I never felt that the story was meant to shock; rather, it (like the narrator) hides its moments of trauma. The voice never falters, and there’s a wryness and distance that keeps it from becoming too emotionally charged.

I’ve heard that some readers have thought this was a SF title, but to me it’s abundantly clear that it’s not. The slow unfolding of Andrew/Win’s story may initially set up the idea that he’s right, but over the course of the book it becomes apparent that he is an unreliable narrator, hiding the truth even from himself.

The book is broken into two timelines–‘matter’ and ‘anti-matter’, which alternate chapters. This type of self-conscious structuring often doesn’t work for me, but Kuehn does it very well. I loved the way the chapters actually seemed to be echoes of each other, mirror images, slightly distorted.

Win himself is at the heart of the book, both narrator and main character. But he is also defined by his relationships to other characters, especially his family. There’s an element of the quintessential YA coming-of-age story here–how do you move beyond your family? How do you be come truly yourself? Win’s journey, though, is a little different. How do you come to terms with the dark places? How do you deal with them when they’re in you?

The sentence level writing is also great. Subtle and restrained, Kuehn somehow manages to create a sense of something happening beneath the surface. This is a book that manages to be both engaging and styled, where the written-ness of the book is apparent, but where this did not appear as a flaw. Writing like this is really hard to do successfully, but Kuehn does.

As I said above, this is a story about hard things. But for those teens who want to take them on, who want to grapple with the world, this is one I would absolutely recommend. It looks at darkness, but it doesn’t become dark. It resists shock value and easy answers in favor of something that is much more complex, and even beautiful.

My only quibble, which is so minor I almost don’t want to mention it, is that I never really got significance of the title, even when we get to the place where it occurs within the book. I wanted it to have resonance, but either I missed it, or that part didn’t quite work for me. 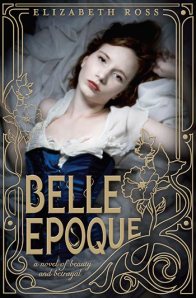 All right, my wordiness is decreasing as the number of books I have yet to review increases. So, bullet points!

All in all, this is one I would recommend to any number of people, though not necessarily in a super-gushy way.

Cover talk: I really have problems with the cover, which seems to contradict so much of what the book says about beauty. I know that covers are meant to sell books, but surely there’s a way to do that which doesn’t undermine the story inside? The overall packaging is gorgeous–all those lovely swirly lines–but I don’t believe that the girl on the cover is Maude, and that’s a problem.

The Caged Graves was one of the Cybils books that I had heard some buzz about before I read it. This turned out to be because it’s a really nice book, full of rich historical detail and nice characters.

Although there’s a flashback/prologue at the beginning, the story really opens with Verity Boone returning to her hometown in Pennsylvania, after having been brought up by her Aunt in Massachusetts following her mother’s death. Already, I liked this set up a lot, because it’s the kind of situation that I’ve seen in stories from the time period, and which at the same time could be familiar for readers. Verity quickly discovers that her reason for coming–a long distance proposal from a young man in the town–is not quite what it seems, and that there is some mystery around the deaths and burials of her mother and her aunt.

From there, it’s a nice Gothicky mystery, as Verity tries to figure out why the townspeople seem so reluctant to discuss either her mother or her aunt. It reminded me a bit of Sarah Rees Brennan’s Lynburn Legacy books (though without the magic) because of the town full of secrets, the determined main character, and the warmth within the family. I believed that Randall Boone loved his wife and his daughter and that he was genuinely trying to do the best he could by them.

I also liked the romance, which gave me a love triangle that worked for me. I bought both Verity’s initial hesitations, and the reasons she changed her mind. It was sweet and slow-burning and made me happy.

Other things–Salerni’s writing is clean and unobtrusive, which is sometimes hard to achieve in historical fiction. I wasn’t surprised by the resolution of the mystery, but I didn’t find this annoying. All in all, this is one I would definitely recommend to both mystery fans and historical fiction fans.

Not having done Round 1 of the Cybils before, I wasn’t sure before I started how it would affect my reading and especially posting habits. The answer is that it does. A lot. I’m reading almost exclusively books for 1) the Cybils 2) the PrintzBlog. And I will certainly be reviewing some of them soon, at least short reviews. But I’m not sure exactly when, and with my schedule for the rest of the month being the way it is (as in, causing me to laugh-cry on a daily basis), I suspect my regular posting schedule will be no more. In short, it’ll probably be feast or famine around here.

EDIT: Also, a reminder that you have until October 15th to get your nominations for the Cybils in! Go and do it! Make me read more!

I’ve meant to write this post three or four times and have completely failed to do so, but better late than never, right?

As some of you already know, I’m going to be involved with the Cybils again this year. (“The Cybils awards are given each year by bloggers for the year’s best children’s and young adult titles. Nominations open to the public on October 1st.”) I’m a first round panelist in the YA Fiction category, which means reading a LOT of books between now and the end of December. But I’m really looking forward to it.

Also, nominations are now open in all categories, now through October 15th! It’s very easy and if your book ends up being a finalist, you get to feel smug. Also, I’ll note that in my category, YA Fiction, we get a lot of realistic contemporary books (which is great! don’t get me wrong!) but mysteries and historical fiction–basically anything that’s not sci-fi or fantasy–are totally eligible.

So far I’ve nominated:
17 & Gone by Nova Ren Suma in YA Fiction
Untold by Sarah Rees Brennan in YA Speculative Fiction
If You Want to Catch a Whale by Julie Fogliano and Erin Stead in Fiction Picture Books
Binny for Short by Hilary McKay in MG Fiction
Handbook for Dragon Slayers by Merrie Haskell in MG Speculative Fiction

In short, yay Cybils! I’m really glad to be a part of this again.