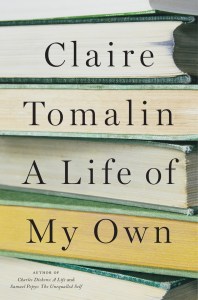 In  A Life of My Own (Penguin, 2017), biographer Claire Tomalin turns the focus onto her own life. Originally a journalist by trade, Tomalin also focuses on her family life and marriage to Nick Tomalin, a fellow journalist.

I will be brutally honest here: I read this book by mistake. For some reason, I always, always mix up Claire Tomalin and Claire Harman. I mean, they’re both British biographers of literary people, so maybe it’s a bit understandable. But anyway, I saw this on the shelf at my local library branch and was like, “OOOH, I loved that Charlotte Bronte book!” And the idea of a biographer then writing about their own life was interesting to me.

So, yeah. I was a good chunk of the way through the book when I realized my mistake. I could have set it down there, but I was interested enough and it was a fast enough read to keep going.

Having actually not read any of Claire Tomalin’s biographies, I can’t really compare A LIfe of My Own. I was on occasion frustrated because the moments that could actually have used some closer examination tended to be breezed by instead. Her first husband’s infidelities and abuse, the trauma of some of her childbirth experiences, her relationship with her sister, the harassment she received as a female journalist–all these were brought up, but also summed up quickly and without really looking at them.

And yet, I don’t know how much to blame her for this. After all, it is harder to turn the lens of detachment on your own life and lay out the minute details of your own trauma, especially when (as I suspect) you have spent a long time refusing to acknowledge that it was really that bad. And in Tomalin’s case, people affected by these events are still alive.

On the other hand, that might be an understandable human reaction, but is it then worth a book deal from a major publisher and international publication of what is almost a family memoir? I don’t know. I really don’t. Maybe it’s helpful to remember that Tomalin’s father also wrote a memoir and published it, revealing details that were deeply hurtful to Tomalin herself. I can understand her wishing to avoid doing the same to her own children and grandchildren.

I will say that there’s a deeply upsetting chapter about the suicide of one of Tomalin’s daughters that I found pretty wrong-headed in its approach to discussing the subject. I am not an expert! But if you read this book and know that’s a tough subject for you, I suggest  just skipping it altogether.

I don’t want to make it sound as if this is a bad book. Tomalin’s experiences as a journalist and editor who was also trying to negotiate family life are interesting in their own right. But even there, a description of sexual comments in her direction is almost always followed by “But Biffy and Squinty* didn’t really mean anything by it!” I’m sure in many ways it is a generational gap, a reflection of a shift in overall attitudes and language. And yet! This is still a book published in 2017–granted, just before the force of the latest anti-harrassment movement began–and it grated on me. Gesturing toward a feminist reclaiming of your own life and story and then not actually completing the gesture is almost worse than not making it at all.

So all in all, a somewhat mixed reaction to this one, and a reinforced feeling that I almost always prefer to read biographies over memoirs. As a side note, I noticed that the US cover is a stack of books, while the UK cover is a photograph of Tomalin herself. Very different marketing, which I assume is driven by name recognition vs a general interest in literary biographies.

* These are not real names; they are Wodehousian inventions of my own

Previously, on By Singing Light:
Exit, Pursued by A Bear by E.K. Johnston (2016)
“Maurice Sendak’s Little Bear” and the disappearance of Else Holmelund Minarik (2014)
Two Biographies: Vera Atkins and Georgette Heyer (2013)
Grave Mercy by Robin LaFevers (2012)