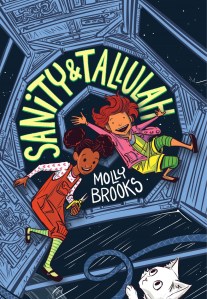 The Dinosaur Artist by Paige Williams: I found this one really fascinating and complex. Without knowing a lot of the background, I thought Williams did a decent job at boiling down some big themes and pieces of background to make sense of why this was a big deal. I did find the end, with its abrupt switch to a more personal tone regarding Eric Prokopi and his family a bit jarring. But overall, this one is recommended!

Sanity and Tallulah by Molly Brooks: Awwwww, what an adorable graphic novel! I loved the visuals of the space stations and ships, the humor, and the friendship between the two main characters. Totally recommended, especially for the Lumberjanes/Noelle Stevenson fans.

The Girl with the Dragon Heart by Stephanie Burgis: A follow-up to The Dragon with a Chocolate Heart; it feels a bit different tonally but a smart and thoughtful fantasy.

What I’m reading next

The Spy with the Red Balloon by Katherine Locke

I’m trying a new approach to my active to-read pile. We’ll see how well it works (so I won’t talk about it just yet). Do you have a system for deciding what books to read next? Or do you pick up whatever you’re in the mood for?

The end of Summer Reading intensity hit me with a vengeance at the beginning of July, and then I was in a friend’s wedding on Sunday. It was beautiful! (No surprise, since this friend is someone who’s very good at creating beauty wherever she goes.) But between Summer Reading and the wedding, I didn’t have a lot of brain space left for blogging.

All that to say, regular posting should be back soon. For now, here are the leftover flowers I took home and am still enjoying.

I was in a dear friend's wedding this weekend and I took some of the beautiful flowers home to enjoy!

A new interview with Rhiannon Giddens, who’s one of my favorite current musicians

On a less happy note, this idea is a big old NOPE from me; as I said on Twitter, this is why “but their careers!” is such a disingenuous and ridiculous defense. Their careers are fine, even when they shouldn’t be. They’ll get another chance. The people they hurt won’t.

Glimpse of Augusts past

With what is now over eleven years of blogging experience, it can be easy sometimes to write posts and then never think about them again. I’m planning to semi-regularly link to old blog posts in the month they were first published and thought I might as well start now.

The Exiles by Hilary McKay

Books of a Feather (three books I had mixed feelings about)

The Bitter Kingdom by Rae Carson

Mirror in the Sky by Aditi Khorana

Josephine Tey Reading Notes: All the other ones

“One the one hand lies darkness, and on the other only hope”: why I love Galadriel 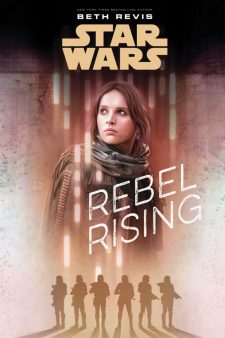 I have to admit that I haven’t historically been a big reader of Star Wars tie-ins, despite loving the movies. But I’ve read several I liked recently, starting with EK Johnston’s Ahsoka.

Martha Wells’ Razor’s Edge has the advantage of being written by an author whose books I really, really like, and of being about Leia (my favorite character). I was initially slightly disoriented because for some reason I thought this took place after the end of the original trilogy. It’s actually between New Hope and Empire Strikes Back. It’s a relatively standalone adventure, featuring space pirates plus some fun banter between Han and Leia.

I really liked the way Wells shades in Leia’s competence–she’s shown to be a great negotiator and diplomat–but also her vulnerability–she feels incredibly responsible for the survivors of Alderaan. It’s a Leia that fits the movies while also giving an added sense of interority to the quippy Princess. This is enjoyable, although I didn’t feel that it ever reached the emotional depths of Wells’ strongest character work (Tremaiiiiine). At the same time, Razor’s Edge is a solid and thoughtful look at echoes from Leia’s past as well as her growing competence and strength.

While Razor’s Edge was published as an adult book, Beth Revis’s recent Rebel Rising is being published and marketed as YA. Telling Jyn Erso’s backstory, interspersed with scenes from Wobani, it goes a long way towards making her a slightly more coherent character than Rogue One was able to achieve.

This Jyn is shattered by the loss of her parents and then by subsequent loss after loss after loss. It’s grim, but we really do come to see the reason of her lack of hope. And we also see her talents as well as the training that made her one of Saw’s best fighters.

Saw himself emerges as a complex figure, and the book does a nice job of showing how his distrust and paranoia grow over Jyn’s years with him. I can’t say the male/female ratio is better than in Rogue One, but we do see a bit more of Lyra’s importance to her daughter, which is nice. (I still long for the AU where Lyra’s the scientist the Empire wants.)

There are a few inconsistencies that bothered me a bit, and the story felt long in places. Despite those quibbles, Rebel Rising is a solid YA that gives us better insight into Jyn and her motivations and background.

I’ve got a guest post up today for a great month-long series at the Fantasy Book Cafe about women in SFF. My post is about what I learned from six favorite authors who formed my sense of the genre. Do check out some of the other posts as well! They’re from a wide range of authors and critics.

I haven’t been writing here much, because I haven’t been reading nearly as much as I want to. Real life has been quite hectic recently, which inevitably ends up with a growing mountain of unread library books.

Having said that, I am also in the middle of reading some great books at the moment, so hopefully my dry spell is at an end.

Starry River of the Sky by Grace Lin, which I’m reading with librarian book club because Grace Lin is wonderful. I’m loving how beautiful these books are as objects–the illustrations, the weight of the paper, the whole thing is just lovely.

The Wee Free Men by Terry Pratchett, which I’m rereading with a couple of friends. I’m only a few chapters in but am already having severe Feelings, because Tiffany is the best and I love her forever the end.

The Obelisk Gate by N.K. Jemisin, which so far is promising to be even more complex and fascinating than the first book!

I’m also skimming through Susan Cooper’s biography of John Langstaff, which I’ve read before, for Reasons.