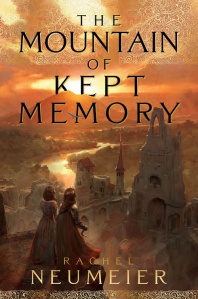 If you’ve been reading this blog for any amount of time, you probably won’t be surprised that I’m writing about this book. I’ve been a fan of Rachel Neumeier’s work since reading The City in the Lake back in 2011. And I definitely have some unspoken expectations when it comes to her books–themes, types of characters, a general style and set of interests that seem pretty common across the different kinds of stories she writes. The Mountain of Kept Memory is really interesting because it is very much a Rachel Neumeier book–but it also feels a little different, in a way I really liked.

Neumeier’s books nearly always focus on main characters who are resourceful girls and young women. Oressa, daughter of the king of Carastind and one of the two main characters in The Mountain of Kept Memory, certainly fits into this pattern. She’s very good at understanding people and motivations, potential costs and shifting allegiances. Her place in her father’s court is limited, but this doesn’t diminish the fact that she’s an extremely strategic thinker–which is helpful when everything begins to go wrong.

There’s an interesting comparison here to characters like Gen and Miles Vorkosigan. Oressa is also almost hypercompetent, good at sneaking through her father’s palace. But unlike Gen and Miles, there’s a strong suggestion that she’s developed these traits at least partly as a way to survive her father. He holds her future in his hand, and it’s pretty clear that he’s not a safe person to be around. There’s a sense of danger in him that’s more hinted at than shown, but which is very effective.

And both her father’s disregard and her overall vulnerabilities are partly because she’s a girl. There’s one really powerful moment which I unfortunately can’t seem to find again where Oressa realizes that her brother Gulien sees their father totally differently, because he’s been treated totally differently. But since Oressa is a girl and therefore largely despised and expendable, she’s been pushed to the edges and largely ignored.

But over the course of the book, she also finds a way to use her compensations to her and Guilen’s advantage. I loved watching her come to terms with the power that she does have and the shape of it. This idea of strengths coming out of vulnerabilities and the way that plays out was really fascinating to me.

Oressa was certainly the heart of the book for me, although I liked both Gulien and Gajdosik. Without wanting to give too much away, there’s a complicated romance here, which worked pretty well for me once it got past the initial stage. Shifting power and understandings are also very present in the relationship between Oressa, Gulien, and Gajdosik. We see it in the bond between the siblings, and the way their strand resolves, the way power is handed back and forth.

But we also see a question of power and relationship in the Kieba and her guardianship over Carastind. Will she exercise her old promise to keep the country safe, or will she let it fall? There’s a real sense of danger here, a sense that something could go truly and finally wrong. And Neumeier shows an nonhuman sense of the world very well, making it especially fraught. How can you predict what the Kieba will do, when she doesn’t think the way we do?

Overall, there’s a feeling of sharpness and almost horror to the scenes in the Kieba’s mountain. I’m thinking of a couple moments in particular which have really stuck with me. It’s not that there’s never a sense of danger in Neumeier’s other books–indeed, there’s quite frequently a very thorny problem driving the plot. But here it feels heightened in a way that’s really effective.

All in all, this was a book I thoroughly enjoyed, though sometimes in a slightly horrified way. There’s a feeling of familiarity in the political intrigue and family complications, but there are also some interesting turns in the story that made it feel also alive and real.

Other reviews: Jason Heller at NPR; Charlotte’s Library; you?

8 replies on “The Mountain of Kept Memory by Rachel Neumeier”

I keep meaning to read more from her. One of these days I will manage that!

Yeah, she’s consistently one of my favorites!

Hmmm. This one is on my long-term to-read list, and I’ve been wondering if I should pick it up sooner rather than later. It sounds like a book that might take a bit of patience to get into, and I don’t have that so much right now. I may wait on it.

Yeah, I can see that! Hope you enjoy it when you have time.

This looks like a beautiful book, especially the exploration of gender roles. Thanks for the great review! 😀

This started off a bit slow for me but I enjoyed reading it overall! I liked Oressa and Gajdosik more than Gulien though.

[…] The Mountain of Kept Memory by Rachel Neumeier: I’m a fan of Rachel Neumeier’s books anyway, but this one was sharp and clear with a fascinating political and social dynamic. It’s another twisty political fantasy that asks big questions about family relationships and the limits of agency. I also loved Oressa a lot–she’s a resourceful and strategic character.  […]