In this month’s Reading Notes series, I’m looking at books by Josephine Tey (Elizabeth MacKintosh). While I enjoy all of the Tey books I’ve read to varying degrees, I just don’t have much to say about several of them. So I’m combining those books into one post here. There are definitely spoilers below! 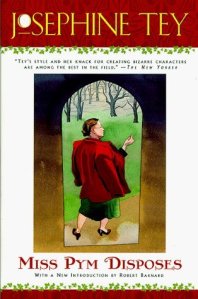 Tey Writes a Thriller–except, being Tey, it’s a very cerebral thriller and not really one at all. (Despite the hopeful suggestiveness of the cover on the Scribner edition.) However, The Singing Sands is arguably more of a Proper Mystery than some, even if Grant is technically on sick leave for overwork and claustrophobia. (Poor Grant is surely the most sickly detective of the Golden Age.) This one takes place in Scotland, and despite all the negative things Tey likes to say about the Scottish, her descriptions of the countryside are so lovely.

Despite the fact that this is a bit more of a traditional mystery than some, Grant is very much at the center of the book. I don’t believe we get any other points of view here, and we see his reactions to the events. So as long as you care about Grant, then it works. I will say that when I first read this book, I found the mystery element pretty thrilling. So perhaps I am merely growing old and crotchety.

The Man in the Queue

This was the first Grant book, published in 1929 under the Gordon Daviot pen-name. It’s a bit unusual among Tey books because it begins with a murder! To be fair, A Shilling for Candles and The Singing Sands start with deaths that are later shown to be murders, but in The Man in the Queue, someone is just plain stabbed. The fact that it is a first book shows in some ways; the Grant here is not the Grant of Daughter of Time, or even The Singing Sands. These books are never particularly interested in continuity of character, but here he doesn’t really have any personality aside from a vague flair and an almost unbelievable obsession with the case. There’s also no mention of his Scottish connections, which by rights there should be.

Anyway, that’s all to say why I don’t find this one particularly memorable. It’s also a perfect case of a writer coming up with a mystery that’s so strong the detective can’t solve it and the denouement only comes about because the real killer confesses. I believe this is the only time that happens in Tey’s books, but it’s an odd sort of beginning to Grant’s fictional career.

Miss Pym Disposes is a non-Grant mystery, published in 1946*. It takes place at a physical training college, which Wikipedia informs me is the kind of school Tey herself went to. It’s a peculiar kind of mystery (I find myself saying that about almost every Tey book) in that Lucy Pym, the main character, is on the scene almost by chance, and doesn’t really do much detecting. In fact, despite the book’s title, she’s overall quite passive. I have a lot of questions about the outcome–she really just decides to not say anything and go back to London? Leaving Mary Innes to do penance for a crime she didn’t commit? And Beau free to just keep on murdering people every time she doesn’t get her way? Come on, Lucy!

Also, sadly, the racism and xenophobia that run through several of Tey’s books are very much present here.

I have also just finished rereading Gaudy Night, and it’s interesting to compare these two books. They’re both mysteries that take place at women’s colleges, and which have at their center questions of female community and the responsibility and wisdom of learning. However, they also have a very different tone and outcome. (Lucy is no Harriet, sorry Lucy.) In some ways, Miss Pym Disposes is more challenging, since the wrongness is at the heart of the college, rather than Gaudy Night’s solution. However, I think it also doesn’t engage as fully or complexly with the questions it raises. Between Harriet and Sayers’ marvelous take on the careful balance between heart and brain, Miss Pym looks a little pale.

* tantalizingly, Miss Pym refers to an Alan that she almost married, but surely not!

To Love and Be Wise

To Love and Be Wise is a somewhat odd book, even for Tey. I think it only really works because her characters are so effective. She can create sympathy for situations and people who would seem boring or terrible in other hands. In any case, it’s not clear for large portions of the book whether an actual crime as occurred. And when the solution is revealed, it’s one that couldn’t be predicted or guessed at. I think there are some similarities with A Shilling for Candles, in the sense that the missing Leslie Searle comes to life through everyone else’s impressions of him. In one sense it’s a very masterful showing-off sort of book, but the ending left me a bit cheated. (I do like Grant’s acceptance of the reveal, but solutions to mysteries where the detective knows something the reader doesn’t will never be my favorite.)

In any case, I read this one less than a week ago and the details are already starting to fade, aside from the gentle send up of various literary genres. I believe there are some nice descriptions of the countryside and houses as well, which Tey usually did have an eye for. But by and large it’s not one that’s really stuck with me, either the first time I read it or now.

3 replies on “Josephine Tey Reading Notes: all the other ones”

[…] Josephine Tey Reading Notes: All the other ones […]

[…] Miss Pym Disposes; The Singing Sands; The Man in the Queue; To Love and Be Wise […]