Masks and Shadows by Stephanie Burgis 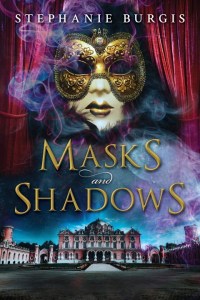 Masks and Shadows is Stephanie Burgis’s latest book, out this month. She’s a favorite author of mine–I absolutely loved the Kat Stephenson series–and someone I really enjoy on Twitter a well. Masks and Shadows is her first adult novel, and I was very curious to read it and see that switch.

Like the Kat books, this is a historical fantasy. It’s set in 1779, in the court of Prince Nikolaus Esterhazy–another reason I was interested to read this one, since I couldn’t think of many other historical fantasies set in Hungary. The story takes place against a backdrop of a tumultuous political era, with many of the tensions appearing in the microcosm of the Esterhazy court. But it also weaves in the personal stories of Carlo Morelli, a renowned castrato singer, and Charlotte von Steinbeck, a widow and a new arrival to court. And there’s some really creepy magic, which probably didn’t happen. (Right?)

At first I was a bit taken aback because my impression had been that this book was focused on Carlo and Charlotte. As it turns out, there are actually a number of narrators! Once I adjusted my expectations there, I ended up really liking this story. It’s a complex and twisty plot with different threads that all come together at the end. And I did like several of the characters (the ones we’re meant to) quite a bit, especially Charlotte.

One of the things I really appreciated was the way Burgis depicted the society of the time, with its arranged marriages, acknowledged mistresses, and intrigues, while also giving us a character who is both part of that society and who also longs for something different. Both Carlo and Charlotte are, in their own ways, dependent on others, and they have a similar journey to finding a way to each other and to the life they actually want to live.

There’s also a lot of lovely writing about opera here. I happen to be an opera fan, personally, so I’m not sure how this would read to someone less interested in that aspect. Haydn is a minor character, and the whole plot hinges on the performance of one of his operas. Music is also the way that Charlotte and Carlo initially connect, as Charlotte’s talent allows Carlo to see beyond her conventional facade. There’s a clear sense of the love of music, especially opera, and its power, which I really liked.

[this paragraph is maybe slightly spoilery] I found the secret society that is the main magical force and the main antagonist a little less compelling. Although their presence makes sense given the fact that there were secret societies in Europe throughout this period, they never seemed entirely real as a threat to me. However, their magic is quite creepy!

That minor issue aside, I ended up really liking this book and the story it tells. It weaves different threads together in an expert way, but I found the central love story between Charlotte and Carlo, their slow recognition of the other’s worth, remained my favorite part.

Book source: ARC from the author

8 responses to “Masks and Shadows by Stephanie Burgis”