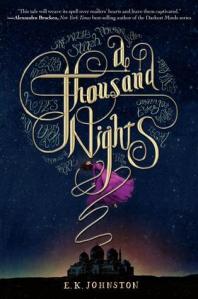 A Thousand Nights is a loose-ish retelling of the Scheherazade story. It’s E.K. Johnston’s third book, and it’s firmly cemented her as a go-to author for me. I got the ARC for this one just before the Cybils started, so I set it aside until now. And while I’m sorry I had to wait this long, I’m happy that I had a chance to really savor this lovely book.

First, I think it’s worth stating upfront that Johnston is really thoughtful about how she changes the Scheherazade story. She resists romance here, which I appreciated. This is not the story of a girl falling in love with her captor, and it so easily could be.

The narrator of A Thousand Nights is never given a name–in fact, many of the characters aren’t. They’re defined in relationship to the narrator, or to the each other, which gives the story an immediacy and intimacy that I think works really well here. In fact, I felt that the narrator’s voice throughout the story, and the authorial choices that Johnston makes in terms of the way language is used, are one of the major strengths of the book.

Despite the fact that she’s not given a name, I found the narrator’s character–the way she experiences the world–worked in a really powerful way. This story is about some big themes and ideas, but it’s driven by the narrator and her choices.

One of the things I most appreciated about the book is the way it centers the relationships between the women in the story. The narrator is motivated by  her love for her sister, and she has strong, important connections with her mother, her sister’s mother, and Lo-Melkhiin’s mother. Even more so, the story explicitly honors and talks about women’s stories, women’s secrets, and women’s lives in a way that I found really refreshing. The place of handcrafts and traditional women’s work in the story is also really great; they’re shown with respect for the work and knowledge that goes into them and shown to have power, even if that power is often overlooked or misunderstood by men.

Moreover, the women in the story are not set in competition with each other. The narrator and her sister love each other, and their mothers are dear friends. Even Lo-Melkhiin’s mother and the servants in the qasr are shown to have relationships with each other and with the narrator that are supportive and nurturing, rather than competitive.

There’s also a great exploration of pride in who you are and where you come from. Many of the narrator’s images and similes grow out of her life in the desert, and she’s shown to draw much of her sense of self and her sense of strength from that identity. In the end, the story makes that a bittersweet thing, and yet I found that it really grounded the narrator and gave her a sense of purpose and the readers a sense of who she is. I had a sense of tradition and culture that’s very deep, even if we don’t see all of it.

Finally, this is a book that’s all about choices. The narrator faces hard choices again and again, and she has to choose rightly and see clearly in order to keep herself alive and to keep her family and country safe. The narrative deals really well with this, making it seem natural, while at the same time drawing attention to this theme and to the narrator’s sense of being on a knife’s edge.

In case it’s not clear, I really loved this book–I found it a joy to read and I was consistently surprised and convinced by Johnston’s choices, and by the narrator and her story. It combines a sense of being rooted in a sense of family and history and self, with a strength and purpose that’s shown to be how the narrator saves herself in the end.

Other reviews: Brandy, Kirkus, Kaye, you?

8 replies on “A Thousand Nights by E.K. Johnston”

Beautiful review! You highlight all of the aspects I loved about this book too. You know there’s going to be a Sleeping Beauty based companion novel this year too right? (SO EXCITED!)

Oh, I did not know that. Very exciting! I just read this one, and it’s beautiful. (Will get around to reviewing it at some point!) She’s a very different writer; I’m not quite sure how to define her difference, but her books are nothing like other YA books.

Yeah, I know what you mean. I follow her on twitter and I think it’s partly that she thinks really deeply about voice and narration.

[…] A Thousand Nights by E.K. Johnston: Johnston has already shown herself to be a writer who uses language deftly. In Story of Owen/Prairie Fire, it’s the way Siobhan experiences music and the world. In A Thousand Nights, it’s the narrator’s life in the desert which shapes how she tells the story. They’re really deliberate choices which at the same time feel very organic to the particular story being told. {my review} […]

[…] and Carrots by Tanita S Davis Exit, Pursued by a Bear by E.K. Johnston A Thousand Nights by E.K. Johnston Mirror in the Sky by Aditi Khorana When the Moon Was Ours by Anna-Marie McLemore Burn, Baby, […]