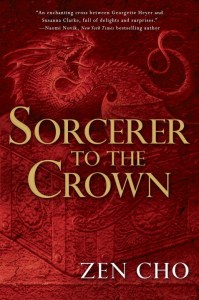 When I first heard the description of this book, I immediately thought, “I MUST READ THIS IMMEDIATELY.” And then, when my library was on the slow side ordering it, I gave up and bought it because it sounded like just about the most Maureen-y book ever written.

And reader! IT WAS.

Things this book is about: Regency England. Magic. Mysteries. Dragons and scary fairies. Families. Finding your place and power. Its two main characters are also a former slave who has become the Sorcerer Royal, and a half-Indian orphan who hasn’t been trained in magic because she’s a woman. In short: Yes, yes, all of the yeses.

I truly liked Zacharias and his journey, but to be honest, I spent most of the book going, “PRUNELLA!” I adored Prunella, both her strengths and insecurities. She’s tenacious in a cause, whether it’s her own or someone else’s, but she’s not foolhardy. And I loved the story of her finding her own place and powers.

Because of the details of the setting and worldbuilding, and the fact that it’s Regency + magic, I know that there have been many comparisons to Jonathan Strange & Mr. Norrell. And I do understand this–I actually think that it’s very helpful reader’s advisory if applied the right way. But at the same time, I think these comparisons do somewhat distract from the ways in which Sorcerer to the Crown is its own thing. Zen Cho has not simply written JS & MN fanfic; she’s in conversation with it, as well as with the wider Regency tradition. And she is more concerned with the marginalized voices. It’s not at all an accident that this book centers Zacharias and Prunella in a way which JS & MN–for all of its strengths–wouldn’t.

ALSO, this book has Mak Genggang, who is terrifying and awesome and I loved the way she and Prunella interact and everything about both of them is amazing. Don’t get me wrong: I shipped Zacharias and Prunella like anything. But I would not be sad if we were gifted an entire book of Prunella and Mak Geggang fighting crime and exchanging advice. And by “not sad” I mean I would read that book forever.

Finally, I really liked the magic here, which is both systematic enough to please my desire for things that make sense, and chaotic enough to seem real. Cho’s fairies and other non-human characters are scary, but also understandable; they seem like characters in their own right. (I was especially fond of some revelations at the climax of the novel, which obviously I won’t spoil but which were delightful.)

Basically, there are some books that I am simply unable to be even slightly objective about because I love them soooo much. This, in case you haven’t figured it out by all the exclamation points and ALL CAPS, is one of them. If any of what I’ve described sounds remotely like your thing, I highly suggest reading it. Apparently, it’s intended to be a trilogy, to which I say HURRAH!

Book information: 2015, Ace Books; adult fantasy but would be an excellent YA crossover

13 replies on “Sorcerer to the Crown by Zen Cho”

This has come up on several people’s Can’t Wait To Read lists, and I’ve seen the title and thought it sounded kind of generic. Your review convinces me I should probably take a closer look! The red and the dragon made me think it was going to be set in China, so when you said Regency England I did a double-take. Much as I love the Sorcery and Cecilia type of thing, it has kind of been done. But these characters don’t sound typical at all. So, okay, yeah, I Really Want to Read!

Definitely not a Chinese dragon on that cover! Head is wayyyy different for one.

I don’t think it’s meant to be Chinese at all–the dragons here are from the faerie world.

But good to know regardless!

Yes, I think this is a little different, and so enjoyable!

This sounds so great! Like Kim I’ve become somewhat tired of the Regency fantasy genre, but if there’s a truly fresh and original take on it I’m all in. Now I need to convince my library to purchase it (how can they not?!?)

Same here! I love the really well done & the new takes on it.

[…] Night by Dorothy Sayers A Pocket Full of Murder by R.J. Anderson The Scorpion Rules by Erin Bow Sorcerer to the Crown by Zen Cho Ancillary Sword by Ann Leckie The Silence of Medair by Andrea K. Höst Busman’s Honeymoon by […]

I requested for my library system to order it and somehow ended up 16th on the waiting list! Not fair! I’ll be looking forward to reading it when my turn comes.

[…] Sorcerer to the Crown by Zen Cho: I can’t even tell you much much I loved this book. It’s one of the mostly purely enjoyable things I’ve read all year. It’s smart, thoughtful about issues of gender and race, funny, and empathetic. I loved Prunella and Zacharias and can’t wait to re-read this book, and read more set in this world. […]