Knitting & other crafts
I FINALLY FINISHED the cable-knit blanket I’ve been making for a coworker. It was fun but also blankets are really large. So now I just need to deliver it to its recipient. Here’s a bad picture of it: 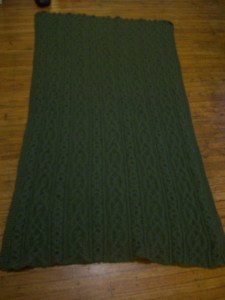 I’m also finishing up a quilt square for a friend’s baby quilt. I think it’ll be pretty cute!

RIGHT? As Deb says, you almost have to make it for the name alone.

It’s really good! And thank you!