One of the joys of living in my own place is having the room to spread out and unpack all of my books. Some of them have been in boxes for four years! Some I recently acquired and had been in stacks on the floor of my bedroom. Now that I’m moved in and have acquired several more bookshelves, they’re all out and it’s quite delightful. So here is a tour of my bookshelves, currently. (No doubt I will have to keep expanding, because for some reason I keep ending up with more books.)

Let’s start in the living room. This one is actually my library book shelf, although I have some random referency non-fiction and music books on the bottom.

Then there’s this one, which my godmother spotted sitting on the side of the road. We picked it up and she cleaned it off for me. Now it has classics, poetry, and craft books. Also extra knitting supplies underneath, where they’re hidden.

Moving on to the bedroom. There’s only one bookshelf in here, but it’s got my favorite authors on it. I may have to start an auxiliary shelf, though, or only put my absolute favorite books from each other on this one, because I’m already running out of space. 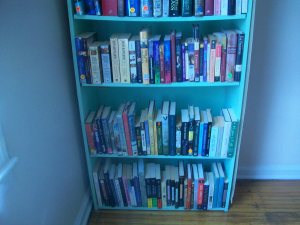 (Close-ups of the books) 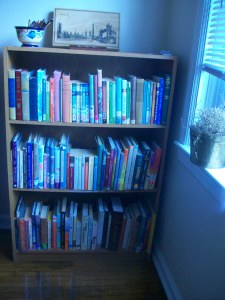 I also have an extra room, which I’m using as a study/library. I was astonished to find that the rest of my collection basically fits on these two bookshelves! On the right, we have: children’s classics, followed by adult fiction and biographies.

On the left, YA fiction, followed by picture books. I have more picture books than I realized, most of which came from a weeding project at work.

Last, but not least, we have my collection of cookbooks. I don’t buy nearly all the cookbooks I want to, because those things are expensive! But I do own several newer ones and a few classics. Also a Mary Poppins themed cookbook and a Beatrix Potter cookbook, because I can’t escape my nerdiness even when cooking.

6 replies on “A tour of my bookshelves”

lovely; your China cabinet is very beautiful! :)) I love books too… they are so fun to have on shelves… I remember the feeling! 🙂

I really love my china cabinet! It’s my favorite piece of furniture.

I love seeing other people’s books! Thanks for sharing!

(and unpacking books and putting them on shelves is a lovely thing….but I am glad I’m not going to have to do it again for ages and ages, if ever!)

I’m really not a fan of moving, I don’t like all the work that goes into packing everything and then unpacking later on. But I think setting up bookshelves is one of the (few, maybe only?) highlights of moving.

I’m jealous of your bookshelves. You’re lucky you have so much room for books. 🙂

Thanks! Yes, it’s definitely a perk of this apartment.