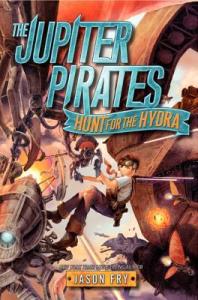 Hunt for the Hydra is one I came across on John Scalzi’s blog, as part of the Big Idea series, which is why I continue to at least skim those posts. Every so often, one of the books featured really catches my eye. The first book in the Jupiter Pirates series, Hunt for the Hydra was one of those and turned out to be a really fun book, with several different layers to the story.

The Tashoone family are space privateers, living on their ship, the Shadow Comet. As part of their family traditions, the children in each generation must compete with each other to win the position of Captain. Tycho, our narrator, and his two siblings view each encounter with another ship as a chance to prove their worth. The set-up isn’t one that will be familiar to most children, but the emotional core of it–comparing yourself with your siblings and feeling lacking–is.

There’s also a lot about the history of the space privateers, and a tension between the older generation, which acted as out and out pirates, and the younger, who operate under the authority of the Jovian Union. And there’s quite a bit of political drama, as the Union and the corporations which run Earth both attempt to maneuver with the Comet and her crew as their pawns.

Hunt for the Hydra is a rollicking adventure story, with space battles and courtroom staredowns. Yesterday on Twitter I was talking about how I want more middle grade & juvenile books to have a political sense, by which I mean an awareness of the larger issues in the world around the main characters. And Hunt for the Hyda does this as well, without detracting in any way from the fun parts.

I’ll also note that, while the main character is a boy, his mother is the current Captain and there’s never a sense of his sister, Yana, being less likely to become Captain because of her gender. On the other hand, I didn’t spot a lot of racial diversity, which seems like a missed opportunity (especially since the Hashoones are never described in detail–surely the cover could have been something other than default white boy?). On the whole, though, this is the kind of smart, thoughtful, fun SFF that I really enjoy!

5 replies on “Hunt for the Hydra by Jason Fry”

I liked this one lots too, even though pirates aren’t my favorite thing!

It was very fun!

[…] already talked about The Year of Billy Miller by Kevin Henkes How I Became a Ghost by Tim Tingle Hunt for the Hydra by Jason Fry Dragonborn by Toby Forward Roll of Thunder, Hear My Cry by Mildred Taylor Lizzie Bright and the […]

I was just thinking that I was wanting to read this and need to write down the title so I can remember to get it when I have slightly fewer books checked out – thanks for reminding me!