Queen’s Thief Week: Myths in A Conspiracy of Kings 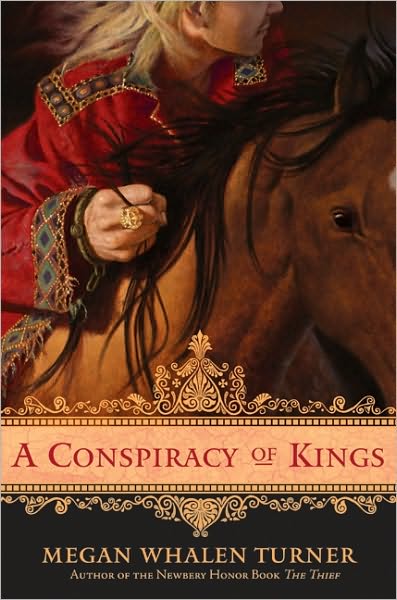 Last post! Wow! This series has been a lot of fun for me to write and I hope that you’ve enjoyed it too. (I’m linking back to all of the other posts at the end of this one.)

Once again, this post will contain definite spoilers for Conspiracy!

There are two myths in A Conspiracy of Kings. It’s interesting to note the number, in a book that’s full of matched pairs. Also, one is told to Eddis by Sophos and one is told to Sophos by Eddis. It’s like they’re flirting via myth! (Not really–they’re more serious than that, but it sounds nice.)

The first myth in Conspiracy is “Morpos’s Choice,” which is told first to Sophos by Moira and then to Eddis by Sophos. Which leads me to an interesting point: where is this story coming from? Did Moira just make it up? Is it an actual event? Or is it a handy myth that she appropriated for the moment? Unlike all the other myths, we can’t give it a firm attribution.

I tend to think of Conspiracy and its myths as a bit different from the rest of the series–not in a bad sense, but in the sense that some of the threads we’ve been following don’t appear here. A few do, however. One of those is choice. It’s obviously brought up in the title of the myth and in the theme that runs through it. Even more than that, it’s about unlikely choices, even desperate ones. I think we can definitely make a case for a connection to Horreon and Hespira.

There’s also an echo of Klimun’s story in the friendship that appears between Morpos and the wolf. As in Klimun’s story, the two seem to consider themselves equals, although to the outside world all the power is on one side. Again, the argument seems to be that true friendship cuts through outward power structures and appearances.

There’s one other thread that I think connects to the earlier books, which is the goddess’s response to Morpos: “There is no must. I offer you a gift of your choice, and you may choose to decline.” There are echoes here of Eddis in QoA (“If I am the pawn of the gods, it is because they know me so well, not because they make up my mind for me”). I think that’s still true, but here the choice is a sharp one, with the goddess’s desire clearly in one direction.

I think there are also connections within the book. There’s a lot of discussion of offending the gods here, which goes back to The Thief, of course, but which particularly relates to Sophos. He worries about offending them with his plans in Tas-Elisa. He doesn’t, of course, because as Gen points out, he couldn’t offend the gods with a pointed stick. Morpos must also make his choice knowing that to refuse the goddess’s gift would be to offend her.

But, although Morpos’s case seems fairly hopeless, there’s a way out of the bind. Because he and the wolf are able to trust each other (more Klimun echoes!), they are able to find a solution to the problem that they both face. It may not work forever, but it gets them out of the forest. There are again connections to Sophos’s dilemma.

The second myth in Conspiracy is the story of Polystrictes, which Eddis tells to Sophos, after expressing amazement that he doesn’t already know it. It’s a very lighthearted myth in a certain sense–the bit with Polystrictes calling the goats is quite funny. In another sense, it’s fairly serious. All in all, I personally find it somewhat difficult to get a grip on, not because it’s difficult to understand, but because it seems so lighthearted. I’m not sure if that’s just the way it is, or if there’s something I’m missing, but I’m giving it my best shot anyway.

Like Morpos’s Choice, this story is about the gifts the gods give, and the fact that they may not always be what we expect. Poor Polystrictes cannot refuse the goats for fear of offending the god. Like Morpos and Sophos, he finds himself faced with a choice that’s not a choice. It appears to be binding, annoying, and perhaps slightly terrifying.

In fact, there’s a way out. This is another theme that connects Morpos, Polystrictes, and Sophos. The problem they face is acute, but there is a solution. It’s interesting that Sophos takes the story to refer to his problem with the barons, which may well be what Eddis was thinking of. By the end of the book, however, it echoes the choices that lead him to Tas-Elisa and to his oaths to Eugenides.

So, those are my thoughts on the two myths in Conspiracy! I can’t wait to read the next book (well, duh) and see what threads carry over, and which books they come from.

Thank you again to Chachic for putting this event together! If you want to read all the posts (and you should–they’re fantastic), you can go here.

Introduction
The Thief
The Queen of Attolia
The King of Attolia

2 responses to “Queen’s Thief Week: Myths in A Conspiracy of Kings”